Put down your phones and listen up 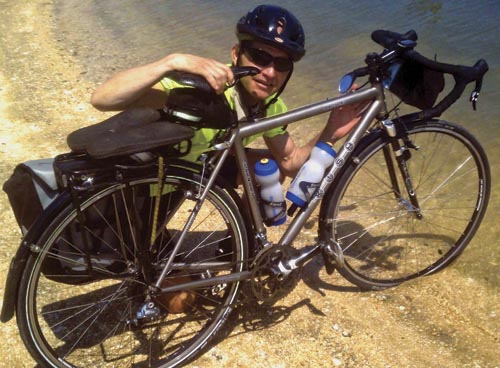 A few months ago I built a touring bike for Bob Okerblom, who was planning a cross country tour. He recently completed the trip. That’s not such a big deal, new bikes are fun, and touring is even more fun, but Bob’s trip had a lot of personal meaning, and greater importance beyond the typical sea-to-shining-sea tour.

In 2009, His son, Eric, was struck and killed on his bike, at the age of 19, by a distracted driver in Santa Maria. Bob did his ride in honor of his son, and to raise awareness that texting, talking, eating, and doing god knows what else while driving can have some serious consequences. The tragedy that befell the Okerblom family is as serious as it gets. Bob spoke at schools, at the Arizona State Legislature, and anywhere else along the way that people would listen to his message.

Bob wrote a great blog about the trip, it’s heartwarming, heartwrenching and everything in between.

You can also read about his return home in this article from the Santa Maria Times.