Speaking of, presently we’re gearing up for what I’m assuming will be a last-minute onslaught of orders ever since we got top billing in the ‘For Him’ category in Walter Magazine’s 2013 Gift Guide:

Who’s Walter, you might ask? Dunno. Some rando that some people in Raleigh named their magazine after I guess. Anyway, now that this is prominently plopped on top of the gift pile (edging out other worthy gifts like something called a ‘Horween Work Wrap‘, which sounds pretty X rated, and some other gizmo terrifyingly billed as a ‘Super Selfie‘)  : 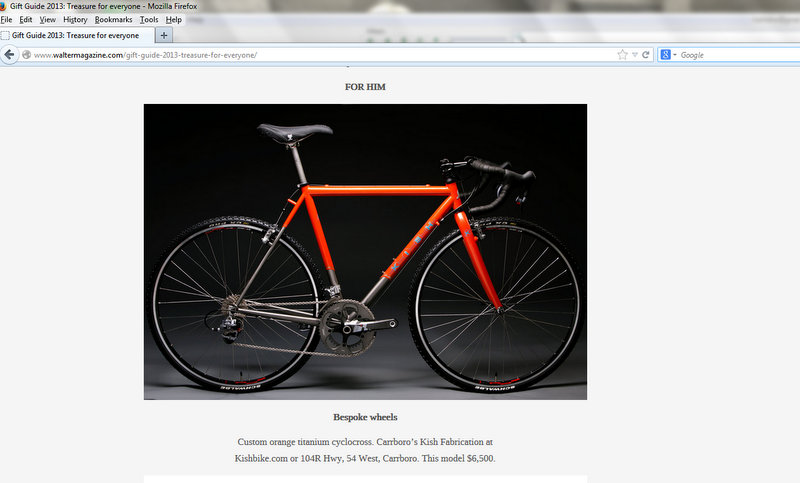 We’ll probably be pretty busy getting these stocking stuffers shipped in time for Saint Nick to chuck em down all the good little boys’ chimneys. Oh, and note to Walt, bicycles make a dandy gift for HER as well. Welcome to the 21st century, dude, geez.

Moving on, I was alerted to the fact that I don not have the market cornered on boring blogs. This one comes from Josh S., a smarty-pants librarian at Duke University, one of 45 institutes of higher learning we have with a 10 mile radius of  us here in the backwoods south. The article is called ‘The Library is as Awesome as My Bike’.

Whatcha got for us, Cletus?

“You might not know it but one of the world’s best custom handmade titanium bicycle builders lives just down the road in Chapel Hill, a guy called Jim Kish. I am a bit of a road biking nut; so I had him build me a bike. If you’ve ever ridden a completely custom bike you know what a life altering experience it is. The bike becomes an extension of your body. It is awesome, just awesome. I even got to go watch him build it, measure, miter, weld the tubes.”

“And man, if you’ve ever seen someone build you your own custom bike, you know you’ve never seen anything so … dull!”

“Jim teaches bike building and tells his students, who are all gung-ho to learn this exciting skill, that most of what you do is measure, file, remeasure, polish, clean. In other words, this completely awesome machine is the result of painstaking, disciplined, thoughtful, creative, composition of very many less awesome things.”

The article goes on for roughly 20,000 more words, I think mostly about books, but it’s a little too ‘inside baseball’ for me. I’m not really what you call a ‘smart’ guy who ‘likes to read’, or even ‘knows how to use quotation marks’ for that matter.

Josh does hit on a theme that I’m fond of though, the awesome thing being a result of a lot of ‘many less awesome things’. I heard the same thing called the ‘ditch digging part of art’ (I’m not saying bicycle building is art, it’s not, sorry) by actual artist Wayne White, in a really great documentary about him called ‘Beauty is Embarrassing‘. You should watch it. If you aren’t sold yet, Wayne is the guy who built this set, along with plenty of other cool stuff: 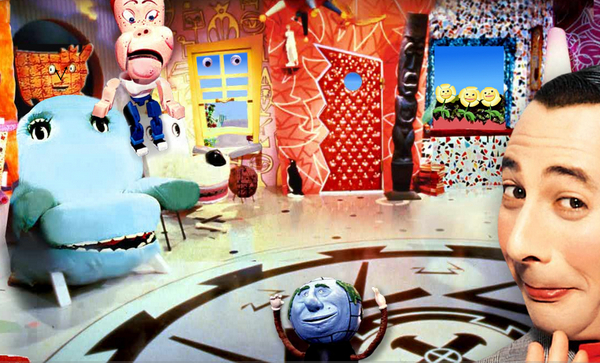 So that’s got to be worth something.

Back in bike news, here’s some bikes that are getting finished up here this week. Mountainous bikes, cyclocrossin’ bikes with disc brakes, road commuter machines… : 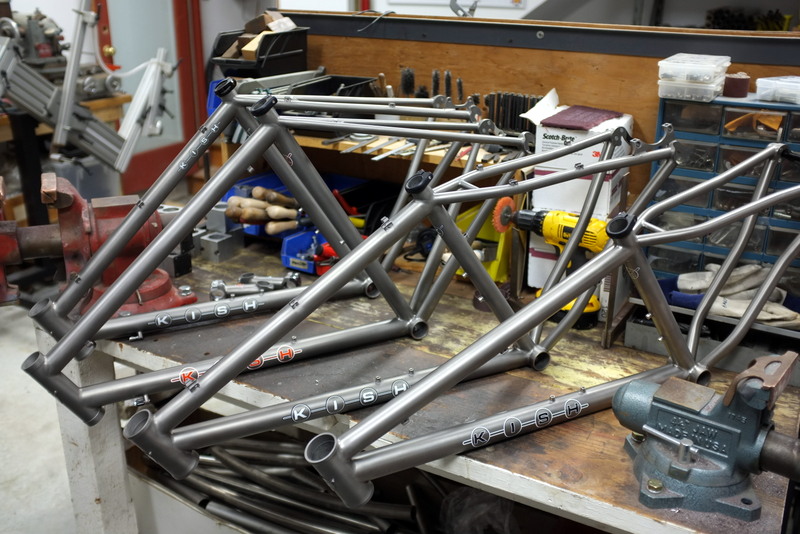 Ok, back to the ditch!

One Response to “Year odds, and year ends”