A long time ago, before I started my career as a frame builder, I had a career as a partially-employed wastrel/bicycle tour leader. The Northeast’s relatively brief cycling season left me plenty of free time, and little money, so when I wasn’t being paid to ride my bike really slow with rich people, I rode my bike almost as slow with other poor people. I saved the proceeds from my backwoods Vermont three card monte games, and survived on a diet of fiddlehead ferns and expired tofu for years to afford my first nice bike. Naturally, I chose a bike ideally suited to touring thousands of miles per year, a too-small (as was the style at the time) mountain bike with no provisions for racks or fenders. I put many inefficient miles on that bike, drowning in buyer’s remorse. Someday, I vowed, I will own a proper touring bike. One without knobby tires and a Mag 21.

Fast forward 15 or 20 years. I am now in the position to actually build that bike. And I did! And then I never rode rode it. How ironic that working as a bike builder didn’t allow me the time to go on long bike tours anymore! (Also I became lazy, but that detracts from the cruel, cruel irony of the story.)

So, here is that bike. It’s painted orange, and has quite an assortment of parts. If these parts were people, some would be old enough to drink, and others would still be drooling in the maternity ward. The drivetrain and wheels, for example, come from an older road bike of mine. Old, but not old enough to be cool, 7 speed Shimano 105. The King Headset, 3T bars and stem, Tubus front rack, and Continental top touring tires date back to right around when it became cool to drink Pabst. The very generic brakes, seat post rack and saddle lived in a box until this morning. 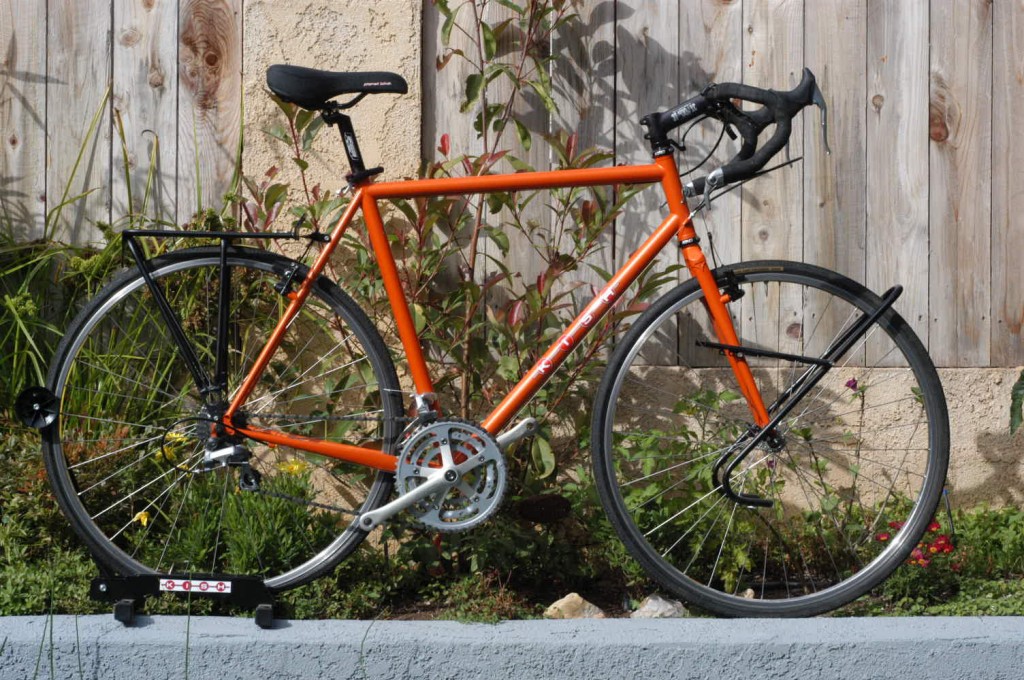 But don’t trifle with the parts. They’re basically free, as this bike is for sale for less than it would cost to buy the frame alone new.

The frame is Oversize (note the capital ‘O’) steel, the seat tube measures 56cm center to center, effective top tube is 59cm. Head tube measures 16cm. There is a slight amount of slope to the top tube. Standover is about 84cm. the chainstays measure 44cm, and the geometry is touring-bike-cruisey. There is less than 1000 miles on the frame and fork, but the fork does have some paint chipped off the dropouts.The frame and fork have plenty of room for touring size tires (up to 32 or 35c) and mounts for racks and fenders.

Send an email if you have questions, or want to buy it.